Democratic lawmakers called Thursday on President Joe Biden to revoke the visa of former Brazilian president Jair Bolsonaro, saying the United States should not offer refuge to anyone involved in riots against Brazil’s newly elected government. 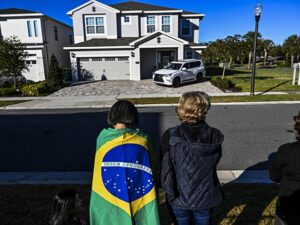 Supporters of ex-Brazilian President Jair Bolsonaro, pray for his health outside his rental house at the Encore Resort at Reunion in Kissimmee, Florida, on January 12, 2023. © Chandan Khanna, AFP

Bolsonaro, a close ally of former US president Donald Trump, flew to Florida rather than attend the January 1 inauguration of President Luiz Inacio Lula da Silva and had made baseless allegations about the integrity of October elections.

Rioters supportive of Bolsonaro on Sunday swarmed Brasilia, vandalizing the presidential palace and other institutions, drawing parallels to the January 6, 2021 attack on the US Capitol.

“We must not allow Mr. Bolsonaro or any other former Brazilian officials to take refuge in the United States to escape justice for any crimes they may have committed when in office,” said the lawmakers, who included prominent progressive Joaquin Castro and Gregory Meeks, the top Democrat on the House Foreign Affairs Committee.

They called on the Biden administration to assess whether Bolsonaro’s US visit remains legal, as he may have flown to the United States on a visa for official visitors even though he is no longer president.

The lawmakers also called on the Justice Department to hold accountable anyone in Florida who “may have financed or supported the violent crimes of January 8.”

Secretary of State Antony Blinken, asked at a news conference Wednesday about Bolsonaro’s presence, said the United States has not received any requests from Brazil but would respond “expeditiously” if it does.

“With regard to individuals, we’re talking now about people who are private citizens,” Blinken said. “It’s not appropriate for us to comment on any individual’s visa status.”

But he said that Biden would work closely with Lula, who is set to visit Washington next month.

“We stand with Brazil’s democracy and its institutions,” Blinken said.

Bolsonaro, in an interview with CNN Brasil, said he had planned to return by the end of January but will move up his plans for health reasons after being hospitalized in connection with injuries sustained in a 2018 knife attack.