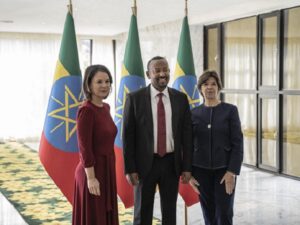 By France 24 with Agence France-Presse

The trip by France’s Catherine Colonna and Annalena Baerbock of Germany began a day after Tigrayan rebels announced they were starting to hand over their heavy weapons, a key component of the November 2 deal.

France’s Colonna welcomed “good progress which we encourage to continue,” at a press briefing with Baerbock.

“Hostilities have ceased, aid has been able to reach the regions which had not received it… a return of arms (by rebels) has begun.”

The pair, on a two-day visit, met Prime Minister Abiy Ahmed and are set to hold talks with other ministers as well as African Union officials and human rights campaigners.

FRANCE 24’s international affairs editor Angela Diffley said the ministers’ visit could be viewed as being carried out on behalf of the European Union.

“There’s been a perception in the Ethiopian government that the EU leans slightly toward the Tigray rebels – that’s because the EU has been very vocal when the blockade was on about getting humanitarian aid to that region – so the EU is quite keen to combat that.”

Diffley said th at in return for its’ funding to rebuild the country’s electricity network and boost its agriculture sector, and in order to keep the peace accord in place, the EU is hoping for a “transitional justice mechanism” to be put into place.

“So that things like war crimes and crimes against humanity and such allegations might be addressed properly. Because there is no way any peace accord will be enduring if that sort of issue is not addressed.”

The ministers also visited a World Food Programme distribution centre, which held 50,000 tonnes of wheat donated by Ukraine to Ethiopia and Somalia.

“It is remarkable that Ukraine, which is under attack, is donating this grain to Ethiopia and Germany and France are supporting the Ukrainian grain donations by organising and financing its transport here,” said Baerbock.

The German minister said Russian President Vladimir Putin was “using grain, using food as a weapon,” which she said had “exacerbated the already difficult situation” in countries like Ethiopia.

Exports from Ukraine — a critical supplier of grains, oilseeds and vegetable oils to global markets — were cut off by a Russian naval embargo after Moscow’s forces invaded the country in February.

A diplomatic source said before the trip that the ministers were carrying a message from the European Union that it is ready to re-engage in Ethiopia provided the ceasefire is respected and that a transitional justice mechanism is put in place.

The devastating war that erupted in November 2020 has killed untold numbers of civilians, displaced more than two million and left millions more in need of humanitarian aid.

Since the peace agreement was signed in the South African capital Pretoria, there has been a limited resumption of aid deliveries to Tigray, which has long faced dire shortages of food, fuel, cash and medicines.

Basic services such as communications, banking and electricity are slowly being restored to the stricken region of six million people.

While the TPLF announced it has begun disarming, local residents and aid workers say the Eritrean army and forces from the neighbouring region of Amhara remain in parts of Tigray and accuse them of murder, rape and looting.

Chinese to visit next week

Under the deal, the disarmament should take place “concurrently” with the withdrawal of foreign forces that are not part of the Ethiopian national army.

The Horn of Africa, and Ethiopia in particular, are among the EU’s priorities as Beijing seeks to boost its influence in the region — as illustrated by China’s new Foreign Minister Qin Gang’s visit to Addis Ababa this week.