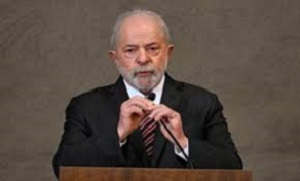 Lula has reportedly removed at least 80 military officials from their jobs in his administration in the last five days. Photograph: Evaristo Sa/AFP/Getty Images

By Tom Phillips | The Guardian

The head of the Brazilian army has been sacked by the country’s new president, Luiz Inácio Lula da Silva, after claims the commander tried to shield rightwing rioters from arrest after the 8 January insurrection in Brasília.

Gen Júlio Cesar de Arruda, who only took up the role in late December, was removed from his position on Saturday, nearly two weeks after supporters of the former far-right president Jair Bolsonaro brought havoc to Brazil’s capital in what Lula’s administration called a botched coup attempt.

Arruda, who some of Lula allies reportedly suspect is politically aligned with Bolsonaro, reportedly stopped police detaining suspected rioters who took refuge at an encampment outside Brasília’s army headquarters on the night of the attack.

“You are not going to arrest people here,” Arruda allegedly told Lula’s justice minister, Flávio Dino, according to the Washington Post.

That highly controversial decision is thought to have allowed scores of rightwing criminals to avoid capture after they ransacked Brazil’s presidential palace, supreme court and congress. And it has reinforced widespread suspicions that the uprising had at least some level of backing from members of Brazil’s armed forces.

Bolsonaro, a pro-gun former army captain who has spent decades cultivating ties with Brazil’s security forces, enjoys significant support among military and police officials. A number of military officials are reported to have encouraged and participated in the pro-Bolsonaro insurrection while Lula has said he suspects the rioters received inside help that enabled them to invade the presidential palace.

“This chap has managed to pollute the entire armed forces,” Lula added of Bolsonaro, who flew to the US on the eve of the 1 January inauguration and has refused to publicly concede defeat in last October’s election.

Lula has removed at least 80 military officials from their jobs in his administration in the last five days, according to the newspaper O Globo, in an apparent attempt to root out hardcore Bolsonaro backers.

Arruda will be replaced by Gen Tomás Miguel Ribeiro Paiva, the 62-year-old head of the south-eastern military command in São Paulo.

In a speech posted on social media on Friday, Ribeiro Paiva urged troops to respect the result of last October’s election, which Lula won by about 2m votes.

“It doesn’t matter [what the result of an election is], it must be respected … It might not always be what we want, but that doesn’t matter,” Ribeiro Paiva said, insisting the military would fulfil their mission whoever their commander-in-chief was.

One prominent Brazilian journalist, Lauro Jardim, claimed the immediate trigger for Arruda’s removal was his refusal to obey an order from Lula to sack Bolsonaro’s former aide-de-camp, Lt Col Mauro Cid, who who was put in charge of a specialist army battalion near Brasília in the dying days of Bolsonaro’s presidency.