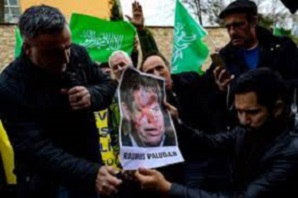 Protesters burn a portrait of Rasmus Paludan in front of the Consulate General of Sweden in Istanbul, Turkey, on January 22, 2023, after the rightwing extremist burned a copy of the Qur’an near the Turkish Embassy in Stockholm. Photo: Agence France-Presse

It said on Sunday that the Qur’an will “remain in its glory” as a “guiding book for all humanity, guiding them to the values of goodness, truth and beauty.”

The repeated incident “indicates the complicity of Swedish authorities” with far-right figures in an attempt to “repeatedly and deliberately offend religious sanctities and provoke Muslims around the world,” it said.

Right-wing politician Rasmus Paludan burned the holy book outside the Turkish Embassy in Stockholm during a demonstration on Saturday, sparking protests.

The “criminal acts of savagery” will not undermine the sanctity of the Holy Qur’an in the heart of a civilized person, Al-Azhar said.

It added that the “grudges of the misguided criminals and the actions of the promoters of fanaticism and sick souls, who have black records in the history of fanaticism, hatred, and wars of religion, will not affect the sanctity of the Holy Qur’an.”

Al-Azhar called on the international community to stand up to attempts to” tamper with religious sanctities,” urging the condemnation of those behind the burning and an immediate investigation into the incident.

Allowing the burning “impedes efforts to promote peace, interfaith dialogue and communication between East and West, as well as between the Islamic world and the West,” it said.

Aboul Gheit said on Twitter: “I condemn in the strongest terms the burning of the Holy Qur’an by an extremist in Stockholm, Sweden.”

He added: “Such extreme and abnormal acts should be condemned and denounced by everyone, especially in Sweden.”

“Freedom of speech should not be a pretext for extremists to ignite the fire of hatred between followers of different religions,” said Aboul Gheit, who mentioned the Swedish Ministry of Foreign Affairs Twitter account in his tweet.

Egypt expressed its strong condemnation of the Stockholm incident.

A statement issued by the Ministry of Foreign Affairs described it as a “disgraceful act” that provoked the feelings of hundreds of millions of Muslims all over the world.

Egypt warned of the dangers of fueling hate speech and violence.

It called for upholding the values of tolerance and peaceful coexistence, and preventing offense to all religions through extremist practices.