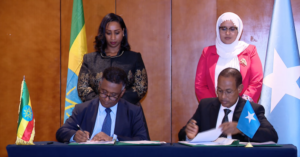 As part of the visit Ethiopia and Somalia signed an agreement to work on the development of the aviation sector in partnership.

He also pointed out that the recently signed agreement will help to expedite economic integration and people to people ties between the two nations.

According to him, the agreement is essential for the operation of Ethiopian Airlines in giving unlimited access flights to Somalia.

If the restriction of movement of people and goods are lifted, the economic cooperation of Ethiopia and Somalia will be boosted, he added.

The Director General, pointed out that the agreement would enable the two countries strengthen their economic cooperation by ensuring the free movement of people, goods and services between the two countries.

The agreement comes in the context of the direction of implementing Agenda 2063 of the Africa.

The agreement also consists of technical cooperation between the two civil aviation authorities to exchange experience, share knowledge and training in the field of aviation, it was learned.

According to Ahemed Moulin, Ethiopian Airlines can assist the people of the two sisterly countries to integrate and move across the borders.

The Director General of the Ethiopian Civil Aviation Authority, Getachew Mengistie on his part said that the new agreement is the renewal of the previous deal that was signed about 34 years ago.

The agreement aims at working together in the field of aviation with the view to enhancing Somalia’s aviation capacity, he added.

The new agreement is expected to enhance the trade, tourism and investment cooperation between the two countries.

It is to be noted that the leaders of Ethiopia and Somalia had agreed to further strengthen cooperation on bilateral and regional issues during Somalia’s President Hassan Sheikh Mohamoud visit to Addis Ababa last September.

During the occasion, the leaders of the two countries had also reaffirmed their commitment to further strengthen the relationship between the nations.