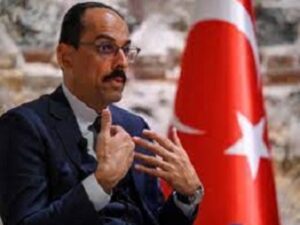 ISTANBUL – Turkey said Saturday it was ready to push for local ceasefires in Ukraine and warned that neither Moscow nor Kyiv had the military means to “win the war”.

Russia this week claimed its first major military success in six months by pushing its forces into Ukraine’s eastern salt mine city of Soledar.

But Kalin said that the brutal cost of fighting might soon see both sides reconsider and accept localised truces in specific parts of the war zone.

“Neither party is in a position to win the war militarily, on the ground.”

Erdogan has been able to maintain open access to Putin by refusing to sign Turkey up to waves of Western sanctions imposed on Russia to punish it for its February invasion.

The Turkish leader has also criticised Western powers for supplying Kyiv with increasingly powerful weapons — despite Ankara’s own sale of military drones and other military equipment to Ukraine.

Kalin said the war will end when the West — and specifically the United States — starts treating Russia as a world power that felt threatened by NATO’s expansion into eastern Europe after the Soviet Union’s collapse.

“What Russia wants is to be respected as a major player and to (avoid) having NATO in their backyard,” Kalin said.

“Russia is interested in a new international architecture (with some) security guarantees,” he said.

Washington flatly rejected Russia’s demand for NATO to pull out of eastern Europe and provide other security guarantees in the weeks preceding the invasion.

The war has only intensified Ukraine’s desire to join NATO and strengthened its military ties with the West.

Kalin dismissed the idea that Ukraine could join the Western defence alliance any time soon.

“Ukraine is not going to join NATO but they need to get enough security guarantee from Russia,” he said.

The expansion would push the alliance even closer to the Russian border and could have the opposite effect of one originally intended by Putin.

Their bids have been fast-tracked by the parliaments of 28 out of 30 NATO member states.

Hungarian Prime Minister Viktor Orban — whose closeness to Putin has created tensions within the European Union — has promised that his parliament would approve the bids once it returns from its winter break next month.

But Turkey has expressed repeated frustrations with what it views as Sweden’s failure to follow through on commitments it made to Ankara at a historic NATO summit in Madrid in June.

Turkey wants Sweden to clamp down on Kurdish groups and extradite suspects it deems “terrorists”.

Sweden has since approved a constitutional amendment that will make it possible to pass tougher anti-terror laws.

But Kalin said it would take at least until June for Sweden’s parliament to vote through the measures and that Ankara was “not in a position” to act until all the laws went into force.