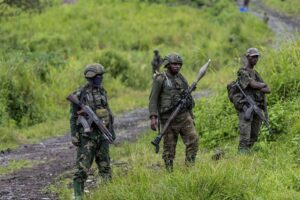 An M23 rebels stand with theirs weapons during a ceremony to mark the withdrawal from their positions in the town of Kibumba, in the eastern of Democratic Republic of Congo, on Dec. 23, 2022. The accounts are haunting. Abductions, torture, rapes. Scores of civilians including women and children have been killed by the M23 rebels in eastern Congo, according to a U.N. report expected to be published this week. Moses Sawasawa, File / AP Photo

By Cara Anna | The Associated Press

NAIROBI, Kenya – Rwanda has fired on a Congolese military aircraft it alleges violated its airspace in a new escalation of tensions between the neighbors that has set off alarm across central Africa.

A Rwandan government statement said “defensive measures” were taken against a Sukhoi-25 from Congo on Tuesday evening, and it urged Congo to “stop this aggression.” Rwanda’s state broadcaster shared unverified video of what appeared to be a projectile fired at an aircraft.

Congo’s government in a statement asserted that the Rwandan attack on its fighter plane occurred in Congolese airspace near the city of Goma’s international airport and that the plane had not entered Rwandan airspace. It said the plane landed without major damage.

Congo considers this “a deliberate act of aggression that equals an act of war” with the goal of sabotaging regional peace efforts, the statement said.

The incident occurred a week before Pope Francis arrives in Congo’s capital, Kinshasa, for a three-day visit to highlight the toll that decades of conflict have taken on the country, particularly eastern Congo, a volatile region rich in minerals critical to much of the world’s technology.

Congo for months has accused Rwanda of supporting a rebel group called M23, one of dozens that’s fighting in eastern Congo.

To Rwanda’s displeasure, powerful voices in the West have openly agreed. United Nations experts last month said they have “substantial evidence” of Rwandan government forces crossing into Congo to reinforce M23 rebels or to conduct operations against another rebel group that includes fighters accused of taking part in the 1994 Rwandan genocide. The United States, France and Germany have urged Rwanda to stop supporting the rebels.

The Rwandan government has called accusations that it is supporting M23 “wrong” and part of a “tired old blame game” undermining efforts by regional leaders to find a lasting peace, “to which Rwanda is fully committed.”

Rwanda also accuses Congo of supporting another rebel group that reportedly includes ethnic Hutus who participated in the genocide that killed more than 800,000 ethnic Tutsis and moderate Hutus who tried to protect them. The U.N. experts said they found evidence of support by some Congolese forces to armed groups.

The public pressure on Rwanda is notable. Human rights watchdogs and others have long accused Rwanda of using the international community’s guilt over its delayed response to the genocide to dampen criticism of its actions including the stifling of opposition at home and abroad.

At a Nov. 23 summit in Angola, which included Congo’s president and Rwanda’s foreign minister, regional leaders called for a cease-fire in eastern Congo to be followed by a withdrawal of rebels from major towns under M23 control. The armed group said it would withdraw from some of the occupied territories before Jan. 15, but some areas remain under its control.