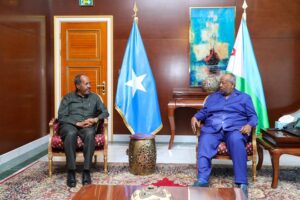 The two Presidents discussed the accomplishments of national forces and local clan militia forces in the fight against al Shabab, stability in Somalia, and the strengthening of the government.

President Mohamud praised Djiboutian troops serving as part of the African Union Mission in Somalia for their assistance to the federal government and training of government forces.

“The National Army and the Somali people have won significant victories in the war against the Khawarij, the most recent of which occurred in the Adan Yabal town, where our people were suffering but are now free. In direct combat, Al-Shabaab was defeated”

“Thank God, we’ve gotten to the point where our people are debating where Shabaab will go after the war,” President said.

Somali forces and allied militias have pushed al Shabaab fighters out of Adan Yabal, a strategic town in Middle Shabelle region that the Islamist group has controlled for six years.

Mahamud Hasan Mahamud, the mayor of Adan Yabal in Middle Shabelle region, said the army and militias had taken control of the town and the surrounding district of the same name without encountering resistance on Monday.

For his part, the President of the Republic of Djibouti, Ismail Omar Guello, praised the good results achieved in the war against al Shabab and stated that the Djibouti government would continue to support the Somali government in defeating the terrorist groups that impede the region’s peace and development.