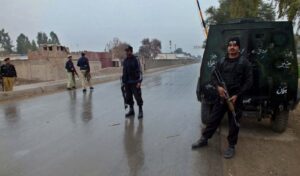 Pakistani policemen cordon the area near the military checkpost following an attack by militants in the Sari Norang area of Lakki Marwat district, around 240 kilometers (149 miles) south of Peshawar on February 2, 2013. (AFP/File)

PESHAWAR, Pakistan – Militants riding on a motorcycle shot and killed two policemen Friday in northwestern Pakistan, a region bordering Afghanistan where violence has spiked in recent months, police said. The Pakistani Taliban promptly claimed responsibility for the attack. In a separate statement,

A police statement said a search was underway to find the pair of gunmen who had fled the scene of the attack in Lakki Marwat, a town in Khyber Pakhtunkhwa province.

The Pakistani Taliban, known as Tehreek-e-Taliban Pakistan or TTP, is a separate group but also a close ally of the Afghan Taliban, who seized power in neighboring Afghanistan in August 2021 as U.S. and NATO troops were in the final stages of their pullout from the country after 20 years of war.

Many TTP leaders and fighters have found sanctuaries and have even been living openly in Afghanistan since the Taliban takeover, which also emboldened the Pakistani Taliban.

Pakistan has seen innumerable militant attacks in the past two decades but there has been an uptick since November, when the TTP ended a monthslong cease-fire with the government.

The Pakistani Taliban regularly carry out shooting attacks or bombings, especially in the rugged and remote northwestern Pakistan, a former TTP stronghold. The recent uptick in violence has raised fears among residents of a possible new military operation in the former tribal regions of North and South Waziristan, now two districts in Khyber Pakhtunkhwa.

TTP spokesman Mohammad Khurasani claimed their fighters targeted troops in two separate attacks in North and South Waziristan on Friday, causing casualties. There was no immediate comment from the military about the claim or any attacks on troops.

Thousands held a rally Friday in South Waziristan demanding peace and asking the military to hold back on sweeping offensives that could force them to flee their homes.

In 2013-2017, when the Pakistani military undertook a broad offensive to eradicate militants there, the fighting displaced millions over the years. The army declared victory in 2017, allowing people to return to their homes.