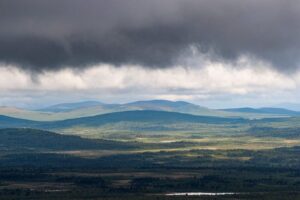 The deposit was discovered near the Arctic town of Kiruna, Sweden. Photographer: Jonathan Nackstrand/AFP/Getty Images

STOCKHOLM – The largest known deposit of rare earth minerals in Europe has just been discovered in Sweden’s Arctic, with potential to help the continent break free from China’s dominance on the market for the resources.

The deposit, found by Swedish state-owned mining company LKAB, contains more than 1 million tons of rare earths, according to a statement on Thursday. Work is still in an exploratory phase and the full extent of the deposit, just north of the company’s biggest mine in the Arctic town of Kiruna, is not known, LKAB said.

“It will be at least 10 to 15 years before we can actually begin mining and deliver raw materials to the market,” Chief Executive Officer Jan Mostrom said, citing a time line derived from other permitting processes in the industry. LKAB plans an application for an exploration concession this year, before seeking permits.

The relative scarcity of rare earth minerals has been identified as a major hurdle in the world’s transition away from fossil fuels. That’s been particularly painful in Europe, where the European Union is trying to assert itself as a major player in renewable energy. China and parts of Southeast Asia dominate both the mining and processing of rare earths.

In Europe, Sweden plays a key role in the bloc’s renewable energy ambitions. It already supplies roughly 90% of the continent’s iron ore, most sourced in LKAB’s mines in the north.

The Nordic nation, which has just taken over the rotating six-month presidency of the EU, has invited the European Commission for a two-day summit in Kiruna. The town has won fame for being moved in its entirety to accommodate the growth of LKAB’s mine.