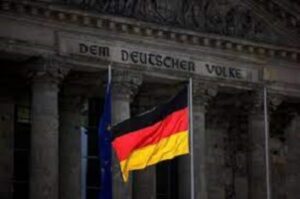 The visit was a “sign of solidarity” with the self-ruled island. PHOTO: REUTERS

By AFP with JIJI

BERLIN – A high-ranking parliamentary delegation from Germany arrived in Taiwan on Monday ahead of an anticipated ministerial visit later this year in moves that could spark tensions with China.

The visit was a “sign of solidarity” with the self-ruled democracy, which China claims as part of its territory, said Marie-Agnes Strack-Zimmermann, chair of the parliamentary defense committee and a leader of the delegation.

The deputies from the pro-business Free Democratic Party (FDP) — a junior partner in Germany’s coalition government — would meet with “senior figures from politics, civil society and the military,” Strack-Zimmermann said.

The delegation would discuss the current “threat situation” in their meetings, she added.

The trip is set to be followed by a visit from German Education Minister Bettina Stark-Watzinger, also of the FDP, in the spring, sources said. It would be the first by a member of the German cabinet in 26 years.

“In light of the military threats from China we have traveled as a delegation from the FDP to Taiwan, because a signal of support for Taiwan is now needed,” said senior FDP MP Johannes Vogel.

The two senior FDP deputies also warned against Germany becoming too economically dependent on China, its biggest trading partner in 2021.

“It can only be to our disadvantage to make ourselves dependent economically on autocratic states,” Strack-Zimmermann said, highlighting Germany’s recent experience with Russia — on whose natural resources it had become dependent before the Ukraine invasion.

Berlin’s diplomatic overtures to Taiwan are likely to rile Beijing.

Xi, China’s most assertive leader in a generation, has made clear that what he calls the “reunification” of Taiwan cannot be passed on to future generations.

Last year saw a spike in tensions as Beijing ramped up military pressure and launched its largest war games in decades to protest against a visit by then U.S. House speaker Nancy Pelosi in August.

China opposes any official exchanges with Taiwan, and has reacted with growing anger to a flurry of visits by Western politicians to the island.

Also in August, the German air force boosted its presence in the Indo-Pacific with the deployment of 13 military aircraft, one year after it sent a frigate to the region for the first time in almost two decades.