Sweden is bracing for demonstrations Saturday that could complicate its efforts to persuade Turkey to approve its NATO accession. 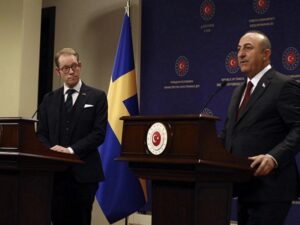 A far-right activist from Denmark has received permission from police to stage a protest outside the Turkish Embassy in Stockholm, where he intends to burn the Quran, Islam’s holy book.

Meanwhile, both pro-Turkish and pro-Kurdish groups are planning demonstrations in the Swedish capital.

Turkey has so far refused to approve bids by Sweden and Finland to join NATO, which needs sign-off by all member states.

Turkey says Sweden in particular needs to crack down on Kurdish and other groups that Ankara considers terrorists.

Sweden has assured Turkey it won’t allow any terrorist groups on Swedish soil. But pro-Kurdish and anti-NATO groups have complicated matters for the Swedish government by staging anti-Turkey demonstrations that have infuriated the Turkish government, including an effigy of President Recep Tayyip Erdogan that was briefly hung outside Stockholm’s City Hall last week.

Tensions could rise further on Saturday when anti-Islam activist Rasmus Paludan plans to burn a Quran outside the Turkish Embassy. Paludan, who also holds Swedish citizenship, has staged similar protests before in both Denmark and Sweden, some of which have sparked violent counterdemonstrations.

Swedish Foreign Minister Tobias Billström told news agency TT on Friday that Sweden respects the freedom of speech. He didn’t want to speculate on how Paludan’s protest, which has been authorized by police, would affect Sweden’s NATO bid, while noting that “everything that prolongs the process unnecessarily is of course something we take very seriously.”

A group calling itself the Swedish Solidarity Committee for Rojava, which claimed it was behind the effigy, is also planning a demonstration against Erdogan and Swedish NATO accession on Saturday, TT reported. Meanwhile, pro-Turkey activists are expected to gather for a separate demonstration near the Turkish Embassy.

Sweden and Finland ditched decades of non-alignment and applied to join NATO following Russia’s invasion of Ukraine. Turkey and Hungary are the only NATO countries that have not yet approved their accession.