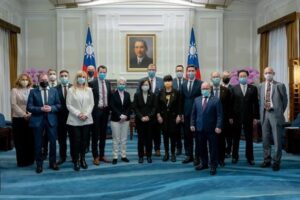 By Huizhong Wu | The Associated Press

TAIPEI, Taiwan – Lithuanian lawmakers on a visit to Taiwan took aim at China Tuesday, saying the world’s second largest economy tried to use all sorts of measures to change Lithuania’s decision to break diplomatic norms in warming up relations with the self-ruled island democracy.

Taiwan is hosting German and Lithuanian lawmakers this week. China, which objects to diplomatic contacts between the island it claims as its own and other nations, held large-scale military exercises aimed at Taiwan over the weekend and into Monday.

The Lithuanian visit is focused on national security and defense as well as economic ties, lawmakers said.

“They tried to break our will, they tried to change our decision, they tried to harass investors and they tried to make economic sanctions … but we survived,” Laurynas Kasciunas, head of the defense committee in Lithuania’s parliament, said. “We are now resilient and stronger, and we can be a role model for other EU countries.”

The Lithuanian delegation is led by Kasciunas, along with the vice chair of the Taiwan friendship group in parliament, Dovile Sakaliene. The lawmakers drew parallels between the threat they face from Russia and the threat Taiwan faces from China, saying they both had authoritarian neighbors.

“We have very clear common goals, strengthening democracy globally … and really helping everyone around us understand very clearly. There cannot be any ambivalence. You are either with the aggressor or you are with the victim,“ Sakaliene said.

Lithuania angered China after it broke with diplomatic convention, allowing Taiwan to name its representative office in Vilnius — a de facto embassy — “Taiwan” instead of “Chinese Taipei,” a term used by other countries to avoid offending Beijing.

China expelled Lithuania’s ambassador and downgraded diplomatic ties with the Baltic country. It also sought to punish the country economically by blocking imports from Lithuania into China. Lithuania then closed its embassy in Beijing and opened a trade office in Taiwan last November.

Taiwan and the mainland have been ruled separately since 1949 following a civil war.

Beijing refuses to have official relations with governments that recognize Taiwan as a sovereign country. It has persuaded all but about a dozen countries, most of them in Africa and Latin America, to switch recognition to the mainland.

Many governments, including the United States, have official diplomatic ties with Beijing while maintaining extensive commercial ties with Taiwan. Many maintain relations with the island’s democratically elected government through trade offices that serve as informal embassies.

Last year, Taiwan started a $1 billion credit program aimed at funding projects by Lithuanian and Taiwanese companies to counter economic pressure from China over an office that the island opened in the EU country.

The German delegates were more subdued in their language and did not offer any direct criticism of China. The delegation met with President Tsai Ing-wen Tuesday morning.

“We also believe that any change of the status quo of the Taiwan Strait can only be achieved by mutual agreement and any attempt to change the status quo by force or threatening to do it by force is inacceptable,“ Johannes Vogel, vice chairman of the Free Democratic Party in Germany, said in opening remarks.

Vogel is heading the German delegation along with Marie-Agnes Strack-Zimmermann, who leads the German Parliament’s Defense Committee.