Denys Monastyrskiy and other key officials, as well as several children, among dead after crash in Kyiv suburb 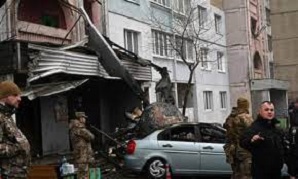 The site in Brovary where the helicopter crashed. Photograph: Sergei Supinsky/AFP/Getty Images

By Isobel Koshiw in Kyiv and Peter Beaumont | The Guardian

At least 15 people including Ukraine’s interior minister, Denys Monastyrsky, other senior officials and several children have been killed after their helicopter crashed by a kindergarten in a suburb of Kyiv.

A number of children at the school in Brovary, a suburb of the capital, were among the casualties after the helicopter hit the building’s roof.

Officials gave no immediate account of the cause of the crash and there was no immediate comment from Russia, which invaded Ukraine last February.

Monastyrsky, who was responsible for the police and security in Ukraine, is the most senior Ukrainian official to die since the war began. The national police chief, Ihor Klymenko, said Monastyrsky had been killed along with his deputy and other senior ministry officials.

The regional governor said 18 people had been killed but emergency services later announced a death toll of 15, and said 25 others had been injured, including 10 children.

“There were children and … staff in the nursery at the time of this tragedy. Everyone has now been evacuated. There are casualties,” the Kyiv region governor, Oleksiy Kuleba, wrote on Telegram.

“For now, we are considering all possible versions of the helicopter crash accident,” Ukraine’s prosecutor general, Andriy Kostin, added amid suggestions it could take several days before the cause of the crash was established.

The helicopter appears to have been travelling to a frontline area in foggy conditions when it came down in an area where there are a number of tall buildings. According to some claims, the crash occurred when the helicopter clipped the kindergarten through pilot error, although it was not clear why it was flying so low in a built-up area.

Video footage from the scene of the crash showed a large area around the kindergarten on fire in the immediate aftermath of the impact, and bodies lying in the street outside.

In one picture, the helicopter’s main rotor could be seen embedded in a car roof. Inside the school, classrooms were littered with debris, with windows broken and walls scorched.

Klymenko said in a statement that the helicopter had been carrying Monastyrskiy and eight others. Klymenko said Monastyrskiy’s deputy minister, Yevhen Yenin, and the state secretary, Yuriy Lubkovych, also died in the crash.

The investigation was being carried out by the security service of Ukraine, Klymenko said.

The forum president, Børge Brende, requested 15 seconds of silence after opening the session to honour the Ukrainian officials killed in the crash.

It came four days after a Russian missile strike on an apartment building in south-east Ukraine killed 45 civilians, including six children – the deadliest attack on civilians since the spring.

“Haven’t had time to recover from one tragedy, there is already another one,” said Kyrylo Tymoshenko, the deputy head of the Ukrainian presidential office.

Separately, Ukraine reported intense fighting overnight in the east of the country, where both sides have taken huge losses for little gain in intense trench warfare over the last two months.

Ukrainian forces repelled attacks in the eastern city of Bakhmut and the village of Klishchiivka just south of it, the Ukrainian military said. Russia has focused on Bakhmut in recent weeks, claiming last week to have taken the mining town of Soledar on its northern outskirts.

After major Ukrainian gains in the second half of 2022, the frontlines have hardened over the last two months. Kyiv says it hopes new western weapons will allow it to resume an offensive to recapture land, especially heavy tanks which would give its troops mobility and protection to push through Russian lines.

Western allies will be gathering on Friday at a US airbase in Germany to pledge more weapons for Ukraine. Attention is focused in particular on Germany, which has veto power over any decision to send its Leopard tanks, which are fielded by armies across Europe and widely seen as the most suitable for Ukraine.

Berlin says a decision on the tanks will be the first item on the agenda of Boris Pistorius, its new defence minister.

Britain, which broke the western taboo by promising a squadron of its Challenger tanks, has called on Germany to approve the Leopards. Poland and Finland have already said they would be ready to send Leopards if Berlin allows it.

Agencies contributed to this report