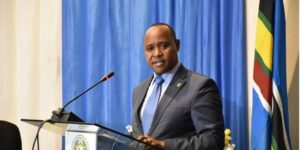 Arusha. The verification procedure may begin shortly, but Somalia’s admission to the East African Community (EAC) is likely to be difficult.

Although the Horn of Africa country may be on the verge of joining the union, issues about its eligibility remain.

The EAC secretary general, Peter Mathuki, recently stated that a team of senior EAC technocrats will fly to Mogadishu next month to begin the mission.

The verification duty comprises analysing the country’s readiness to join the Community, which currently has seven partner states.

“A verification mission will be despatched to Mogadishu in January of next year,” he said when addressing newly elected regional lawmakers.

This, Dr Mathuki stressed, was one of the major tasks ahead of the organisation to widen and deepen the regional integration.

The EAC boss had already been there in October of this year during which he held discussions with Somalia leaders, including President Hassan Sheikh Mohamud.

Generally, Somalia meets some criteria to become a member of the Community, including proximity to the current EAC.

Others are inter-dependence between it and the EAC partner states and its status of a market-driven economy.

Its potential contribution to the strengthening of the bloc is not likely to be much questioned being a trading neighbour.

However, the other key criteria will have much to do with the country’s current state of insecurity and governance.

The EAC Treaty says a foreign country intending to join the bloc must adhere to universally acceptable principles of good governance.

Adherence to democracy, the rule of law, and observance of human rights and social justice are all linked to this. That will largely await the EAC verification mission when they land at Aden Abdulle International Airport in Mogadishu next month.

However, the EAC boss is confident that the violence-torn Horn of Africa country will meet all the criteria and join the bloc.

He banked this on DR Congo’s seamless admittance as the community’s seventh member state early this year.

Dr Mathuki said the expansion of the EAC was for the benefit of the people of the region and the economies of their countries.

EAC verification teams for the proposed new member states often consisted of at least three officials of the partner states with full membership.

In July, the EAC Summit of Heads of State unanimously agreed to admit Somalia as its eighth member state following its application to join the bloc some years back.

For its part, Somalia believes its entry into the community will boost the regional economy, especially in areas of the blue economy and cross border trade.

President Mohamud told the EAC delegation in October that his country was linked to Somalia through business and historical linkages.

However, regional observers in East Africa have often pointed to the state of insecurity in Somalia as one of the reasons which had delayed its admission into the EAC.

For the past three decades the country has gone through chaos, mainly attributed to deadly attacks by Al Shabaab militia within Somalia and in some East African states, notably Kenya and Uganda.