Somalia’s Al Shabaab Attacks Base In Town It Had Lost, Kills Seven 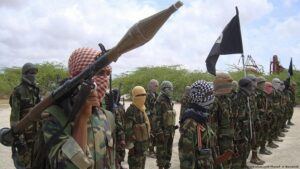 File – Despite long-running military offensives against the group, Al-Shabab still has a significant capability to carry out terrorist attacks. (File: 2010) Image: picture-alliance/AP Photo/F. A. Warsameh

MOGADISHU – Islamist al Shabaab militants on Friday killed at least seven soldiers at a Somali military base in a town re-captured by the government, the information ministry and militant group said.

The attack was eventually repelled, an officer at the base in the central Somali town of Galcad told Reuters. He said the dead included the base’s deputy commander, who was part of a U.S.-trained unit stationed there.

The base is run by Danab, a unit of U.S.-trained commandos who have participated in the offensive against the militants.

Somalia’s information ministry said in a statement that in addition to al Shabaab killing seven soldiers, their soldiers had killed 100 of the group’s fighters and destroyed five gun-mounted pick-up vehicles known as technicals.

In a statement al Shabaab said it had “miraculously overrun the U.S.-trained forces” in the town and killed scores of soldiers.

The government and al Shabaab often give different casualty numbers from the same attack.

The group has been fighting since 2006 to topple the country’s central government and install its own rule, based on a strict interpretation of Islam.

Drones deployed to help reinforce the military carried out bombings against the militants and chased them out of the town, Abdullahi said.

Government forces just this week seized Galcad and the port town of Harardhere in Somalia’s Galmudug region from al Shabaab control, a major success for the ongoing government offensive.

Galcad resident Abdullahi Nur told Reuters he heard huge blasts at the base, followed by heavy fighting and air strikes early on Friday.

“We have been celebrating the liberation of the town but it is now covered with smoke. May God save us,” he said.