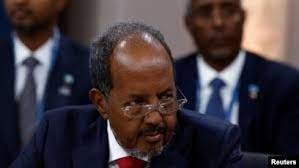 MOGADISHU, SOMALIA – Somali president Hassan Sheikh Mohamud has called on young al-Shabab fighters he says are “brainwashed” to surrender to the government amid ongoing military offensives against the group.

Speaking at a mosque in the country’s capital Friday, Mohamud, who last year after his election for second term declared an “all-out war” against the Islamist insurgents, also called on the al-Shabab fighters to denounce the terrorist ideology before it is too late.

His remarks came after the militants carried out two attacks on government forces in Somalia’s central region in two days, killing more than 43 people including senior officers.

He said he wants to tell the boys to return from the wrong path they are taking. He urged them to return to their government, to their people and to their religion. He said every step they take from now on will only increase their guilt.

The president’s message comes as Somali forces, backed by locals, continue battling the group in the “total war” he declared on the militants. Government forces have liberated large swathes of territory from the group, mainly in the south-central state of Hirshabelle.

Speaking to state-run television in Mogadishu, Somali Prime Minister Hamza Abdi Barre said an investigation is underway into soldiers who were arrested on suspicion of facilitating the al-Shabab attack on the Villa Rays Hotel in Mogadishu in late November.

Barre did not say how many soldiers were involved.

He says all the soldiers who were working that day have been arrested and an investigation is currently underway. He says he wants the ongoing investigation to be successful and impartial.

The popular Villa Rays hotel was located near the presidential palace in Mogadishu and was frequented by senior government and security officials.

The Somali government has been fighting al-Shabab for more than 15 years. The Islamist group carries out deadly attacks in the Horn of Africa nation targeting government officials and African Union peacekeepers.