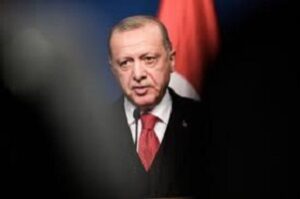 ANKARA – Turkey summoned Sweden’s ambassador after supporters of the Kurdish militant group PKK and its affiliates hanged an effigy of Turkish President Recep Tayyip Erdogan during a protest in Stockholm.

Sweden must crack down on terrorism if it wants to join Nato, Turkey said, after the puppet was hung by the feet outside the city hall in the Swedish capital on Thursday.

Turkey also cancelled a planned visit by the speaker of the Swedish Parliament, Andreas Norlen, to Ankara next week, while Mr Erdogan’s lawyers filed a criminal complaint in Turkey against protesters in Stockholm on Friday.

“We are stating again clearly that it is not possible for the Nato membership process to progress unless the activities of terrorist organisations are ended,” Mr Erdogan’s spokesman Ibrahim Kalin said in a statement on Twitter on Thursday.

Sweden and Finland have made progress towards winning Ankara’s approval to join the North Atlantic Treaty Organization (Nato).

But Turkey continues to indicate it is still not happy with Sweden, whose courts have blocked extradition of some suspects wanted by Mr Erdogan’s government.

Sweden has said it cannot meet such demands if they go against legal rulings, as the government has no sway over the judiciary.

As Mr Erdogan faces elections within months, his government is keen to consolidate nationalist support by pressuring the Nordic nations to crack down not only on supporters of the PKK, but also on affiliated Kurdish YPG militants in Syria.

The PKK is already branded as a terrorist organisation by the US and the European Union for waging a war in Turkey’s south-east for autonomy.

“Portraying a democratically elected president hung outside the City Hall is despicable,” Mr Billstrom said on Twitter on Thursday, commenting on the protest by YPG and PKK supporters.

Turkey has been objecting to the two Nordic countries joining Nato since they put in bids in May following Russia’s invasion of Ukraine.

An agreement hammered out at the bloc’s summit in June last year allowed the process to move forward, and 28 of 30 allies have since ratified their entry, with Hungary also remaining a holdout.

A trilateral memorandum signed in Madrid laid out measures for Sweden and Finland to take to overcome Turkey’s objections.

Nato membership for the two militarily non-aligned countries would mark a significant shift in the European security landscape and offer more protection to the exposed Baltic countries on the alliance’s eastern frontier.

Both Sweden and Finland are in talks with the US on defence cooperation agreements.