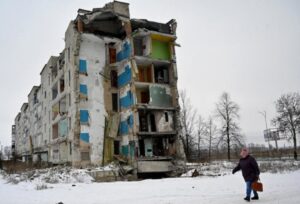 An air raid alert wailed across the country as people were heading to work. File/AFP

An air raid alert wailed across the country as people were heading to work. In the capital Kyiv, crowds of people sheltered in underground metro stations, with some sitting on blankets or small plastic chairs.

Russia has targeted the power grid with missile and drone strikes since October, causing sweeping blackouts and other outages during winter. The latest missile strikes came hours after an overnight drone attack.

A Reuters reporter heard the sound of a missile flying overhead at a low altitude, about 30 km from Kyiv.

“As many as six Tu-95 (warplanes) have preliminarily taken off from Murmansk region and launched missiles,” air force spokesperson Yuriy Ihnat said on national television.

“We expect more than 30 missiles that have in principle already begun to appear in various regions. Air defences are working,” he said, adding there was no information about drones.

He said the missiles appeared primarily to be targeting central Ukraine, but that the salvos could change course.

Images on the Telegram messenger app showed smoke rising from a location in the Odesa region. Other unconfirmed reports said explosions had been heard. Reuters was unable to immediately verify those reports.

“The first Russian missiles have been shot down,” Andriy Yermak, head of the president’s office said.

The air attacks came hours after the United States and Germany said they had agreed to send Ukraine battle tanks.

Iryna, an accountant in her 50s, was sat on a bench among the crowds sheltering in the Universitet metro station said she was worried about her husband.

“He was planning to go to a post office in the morning and now he is not answering his phone,” she said.

DTEK, Ukraine’s largest private energy producer, said it was conducting emergency power shutdowns in the capital, Kyiv, the surrounding region, and also the regions of Odesa and Dnipropetrovsk due to a danger of missile attack.

Other power producers also said they were conducting emergency power shutdowns in other parts of the country.

Overnight, the military said its anti-aircraft defences had shot down all 24 drones sent by Russia.

Fifteen of the drones were downed around the capital Kyiv where there were no reports of any damage.