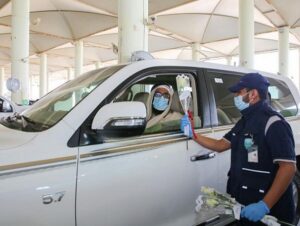 Chief of the Saudi Directorate of Passports, Lt. Gen. Sulaiman Abdulaziz, cited a study with relevant agencies in the country to allow pilgrims to enter the kingdom through all land crossings. Photo: Agence France-Presse (AFP)

CAIRO – Saudi Arabia is studying the possibility of opening all its land border crossings for Muslim pilgrims as the country has dropped limits on numbers of arrivals for this year’s Hajj, a Saudi official has disclosed.

Chief of the Saudi Directorate of Passports, Lt. Gen. Sulaiman Abdulaziz, cited a study with relevant agencies in the country to allow pilgrims to enter the kingdom through all land crossings.

Speaking at a conference and exhibition on pilgrimage, dubbed Expo Hajj 2030, being held in the Red Sea city of Jeddah, the official said Saudi Arabia is ready to receive any number of pilgrims this year thanks to its “vigorous digital infrastructure”.

In this regard, the official referred to a fast-track effort facilitating procedures for pilgrims coming from five countries, known as the “Makkah Route Initiative”.

The initiative, which kicked off on a trial basis in 2017, covers pilgrims from Pakistan, Malaysia, Indonesia, Morocco and Bangladesh.

Facilities offered to pilgrims coming from the five countries include issuance of electronic visas at home, finalising passport procedures as well as tagging and sorting out luggage at the departure airports.

Vaccinations against meningitis and seasonal flu

Accordingly, on arrival in Saudi Arabia, those pilgrims head directly to their residences in the holy cities of Makkah and Medina while their luggage are delivered right to their stay places.

Saudi Arabia this week said there will be no limits on the numbers of pilgrims from around the world for the upcoming Hajj season, reversing earlier restrictions prompted by the COVID-19 pandemic in the past two years.

However, the Ministry of Hajj and Umrah confirmed that Muslims wishing to perform this year’s Hajj are required to be fully vaccinated against COVID-19, Saudi news portal Sabq reported.

The ministry also said that vaccinations against meningitis and seasonal flu are also obligatory for every pilgrim. who must have no acute chronic or infectious diseases.

In the past two years, Saudi Arabia downsized the numbers of Muslims allowed to perform the Hajj rites to prevent spread of COVID-19. Around 2.5 million Muslims used to attend Hajj annually in the pre-pandemic times. Hajj is one of Islam’s five pillars.

Muslims, who can physically and financially afford Hajj, have to perform it at least once in a lifetime.