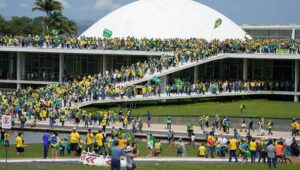 By Tom Phillips and Andrew Downie | The Guardian

The massed attack was a stunning security breach that was immediately compared to the 6 January invasion of the US Capitol by followers of Donald Trump in 2021.

“What we are witnessing is a terrorist attack,” the news anchor Erick Bang announced on the GloboNews television network as word of the upheaval spread. “The three buildings have been invaded by coup-mongering terrorists.”

Shocking video footage showed the pro-Bolsonaro militants sprinting up the ramp into the Palácio do Planalto, the presidential offices, roaming the building’s corridors and vandalising the nearby supreme court, whose windows had been smashed.

Videos posted on social media showed fires burning inside the congress building. Furniture was broken and tossed around, objects were reportedly stolen in the presidential palace and the supreme court, and in some places sprinklers appeared to be dousing chambers.

“They are throwing chairs out of the windows,” said another bewildered GloboNews commentator, Eliane Cantanhêde. “They are destroying public buildings.”

Lula, a veteran leftist, was sworn in as Brazil’s new president last Sunday in celebrations attended by hundreds of thousands of Brazilians.

But thousands of pro-Bolsonaro extremists have refused to accept Lula’s narrow victory in October’s election, spending recent weeks camping outside army bases across the country and calling for a military coup.

Lula was not in Brasília on Sunday but he gave an angry speech blaming Bolsonaro for the chaos and promising that “anyone involved will be punished”.

Calling those who took part in the attacks “vandals, neo-fascists and fanatics”, Lula ordered a federal intervention in the capital, bringing policing under the control of the central government.

Military police in Brasília were conspicuous by their absence and the mobs faced little opposition as they marched towards the three branches of government.

Lula said capital law enforcement bodies showed “incompetence, bad faith or malice” and promised swift action. He vowed to return to the capital on Sunday and visit the three buildings under attack.

By the end of the afternoon, authorities appeared to have retaken control of some of the buildings, with GloboNews reporting 150 people had been arrested. TV footage showed dozens of people handcuffed and lying on the ground watched over by law enforcement officers.

Lula’s response came a few hours after a pro-Bolsonaro mob marched from the army headquarters in Brasília towards the heart of Brazilian politics, the Three Powers Plaza, which houses the supreme court, the presidential palace and congress.

The militants – many wearing the yellow and green Brazil flag that became a symbol of Bolsonaro’s far-right movement – broke through police lines and surged on to the ramp leading into the congress building.

Leftist politicians voiced shock and anger as the horde advanced. “The National Congress is being attacked by TERRORISTS!” tweeted Randolfe Rodrigues, a senator.

Soon after another prominent Lula ally, André Janones, shared footage that showed scores of radicals inside the grounds of the Palácio do Planalto, the presidential offices where last week’s inauguration ceremony was held.

Portugal’s foreign minister, João Gomes Cravinho, told Reuters that he believed “without a doubt” that Bolsonaro was responsible for the scenes, adding: “His voice is heard by these anti-democratic demonstrators.”

World leaders were quick to condemn the upheaval, which Chile’s president, Gabriel Boric, denounced as a “disgraceful” and “cowardly and vile attack on democracy”.

Spain’s prime minister, Pedro Sánchez, condemned the stormings in a tweet on Sunday night, saying: “I offer my full support to president Lula and to the institutions that were freely and democratically chosen by the Brazilian people. We categorically condemn the assault on the congress of Brazil and call for an immediate return to democratic normality.”

Emmanuel Macron, the French president, tweeted: “The will of the Brazilian people and the democratic institutions must be respected. President @LulaOficial can count on the unconditional support of France.”

The US secretary of state, Antony Blinken, said: “We condemn the attacks on Brazil’s Presidency, Congress, and Supreme Court today. Using violence to attack democratic institutions is always unacceptable. We join @LulaOficial in urging an immediate end to these actions.”

Observers have spent months warning that Bolsonaro hardliners might stage a South American version of the US’s Capitol invasion in the hope of overturning Lula’s win. During his tumultuous four-year administration, Bolsonaro repeatedly hinted that a military takeover might be in the works and battled to undermine Brazil’s internationally respected electronic voting system.

“Bolsonaro and his team have looked very closely at what happened on January 6 trying to understand why it was that a sitting president failed in his effort to overturn election results,” the former US ambassador to Brazil, Thomas Shannon, told the Guardian before last year’s election.

Bolsonaro, a far-right former army captain whose main international ally was Trump, flew out of Brazil on the eve of Lula’s inauguration and is currently in Florida.

Bolsonaro fell almost completely silent after Lula’s victory, with many interpreting his silence as a tacit approval of the anti-democratic protesters who have been calling on Brazil’s military to intervene.

The weeks leading up to Lula’s 1 January inauguration saw two clear signals of the violence that was to come.

On 13 December, radicals tried to storm the federal police headquarters in Brasília, torching buses and cars as they moved through the city. Just before Christmas another extremist Bolsonaro supporter was arrested and allegedly confessed to a plot to bomb Brasília’s airport in an attempt to spark turmoil that might justify a military coup.