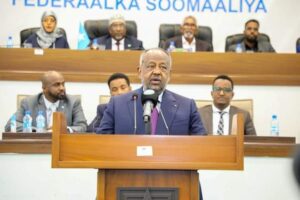 On Thursday, Djibouti President Ismail Omar Guelleh addressed Somalia’s parliament, expressing his support for the Somali government’s ongoing efforts to combat terrorism and restore stability.
The Djiboutian praised the progress made in recent months but acknowledged that there is still much work to be done.
President Guelleh emphasized the importance of regional cooperation and solidarity in addressing the challenges faced by Somalia and Djibouti. He highlighted the two countries shared history and cultural ties and stressed the need for closer collaboration on security, economic development, and infrastructure.
Djibouti is one of five major troop-contributing countries to the African Union Transition Mission in Somalia (ATMIS), formerly the African Union Mission to Somalia (AMISOM). The country has deployed a contingent of 960 troops based in Beledweyne which serves as Sector 4 headquarters.
In addition to addressing the Somali parliament, President Guelleh also attended the official opening of the Intergovernmental Somali Language Academy along with Somali President Hassan Sheikh Mohamud and other top officials.
Observers said the relationship between Somalia and Djibouti had improved since President Mohamud took office in mid-May. Since then, the two presidents have met several times, with the most recent visit earlier this month at Djibouti’s Presidential Palace.
The visit by President Guelleh was widely seen as a significant milestone within Somalia’s federal government. Observers noted that the relationship between Somalia and Djibouti had strengthened since Mohamud came to power in mid-May. The two leaders have met several times since then, with the last meeting coming in early December at Djibouti’s Presidential Palace.
2022-12-29
afaaro