Somaliland: President Bihi Lashes Out at OCHA for Duplicity in the Las Anod Case

HARGEISA – President Musa Bihi Abdi of the Republic of Somaliland sharply lashed out, Sunday, at the United Nations Office for the Coordination of Humanitarian Affairs (OCHA) for Somalia (and also for Somaliland) for showing a false humanitarian face after an absence of more than 30 years.

The President, speaking at a day earmarked in Somaliland for the commemoration of fallen martyrs during the long, arduous struggle for emancipation from Somalia’s military dictatorship, said the UN office has been quick at condemning Somaliland’s eviction of Somalia-born settlers in the town of Las Anod, the provincial capital of Sool region.

President Bihi wondered why this particular office has so judiciously absented itself from the area and in the provision of any meaningful humanitarian intervention benefiting the people it was now championing for the past 30 years or so.

“Not even one day did this office offer a single water truck or a unit of bottled water, a piece of anti-malarial quinine or a plastic shelter sheet for the past thirty years,” he said, asking “where were they during these long years? Why the sudden appearance and the crocodile tears?”.

The President rhetorically continued why – if OCHA recognized these people as refugees – did not resettle them or feed them or shelter or offer them any kind of assistance directly, indirectly, or through any other channel.

“This shows the United Nation’s duplicity and insincerity of approach. To milch oil-rich countries such as those in the Gulf of Dollars, it wrongly showcases people like those sent out of Las Anod,” the President stated.

President Bihi also addressed Somalia elements and federal states who used the eviction as propaganda fodder, exaggerating facts and making up others to replenish their all-out onslaught against the Republic of Somalia.

“I am saying to those other elements in Somalia blowing the Las Anod security measure out of proportion that not a single person from the Southwest federal state of Somalia (Baidoa) or from any other state in Somalia has been harmed or killed in Somalia for these past 30 years. Not a year passes without these people losing their lives in Bossassa and elsewhere in Puntland. As for Mogadishu, people’s blood has long been part of the commodity openly traded there. Other cities and other places have equally taken their toll of the displaced. Not was ever the case so in Somaliland,” he added.

OCHA has, since Somaliland evicted Somalia-born members of a community resident in Las Anod for over two to three decades, made statements that echoed the Somalia barrage of the event.

Somaliland, following up on a decision the regional security authorities reached to narrow down security threats that have thus far claimed over 185 people, packed these families home, safely escorting them to the border with Somalia.

OCHA neither acknowledged the security threat addressed nor showed impartiality in its statements.

“Humanitarian partners and authorities in Puntland are anticipating new displacements from parts of Somaliland especially in Sanaag after Somaliland authorities in Sanaag issued a statement on the 6 October calling for people from other parts of Somalia to leave Ceerigaabo town and surrounding villages within 15 days (by 21 October). Despite calls for a stay or extension of the deadline (particularly those from South West State), the Somaliland government has not responded yet,” OCHA said in a situation overview on its page on 11 October.

The report kept quoting and referring to sources and ‘efforts’ of the Puntland federal state of Somalia – one of the most vociferous detractors of Somaliland not only in this occasion but as a matter of principle.

“Authorities and humanitarian partners have scaled up their response efforts. Between 9 and 10 October, Puntland authorities in collaboration with South West State authorities facilitated air transport for 275 people from Gaalkacyo to Baidoa. On 5 October, Puntland authorities provided road transport to 636 people destined for Hirshabelle, South West State and Banadir. So far, 911 people from Laas Caanood have left Gaalkacyo. Some 56 Ethiopian nationals have requested to be repatriated. Some of the forcibly displaced people have reportedly reached Mogadishu and Belet Weyne using their own means,” the same report continued to state. 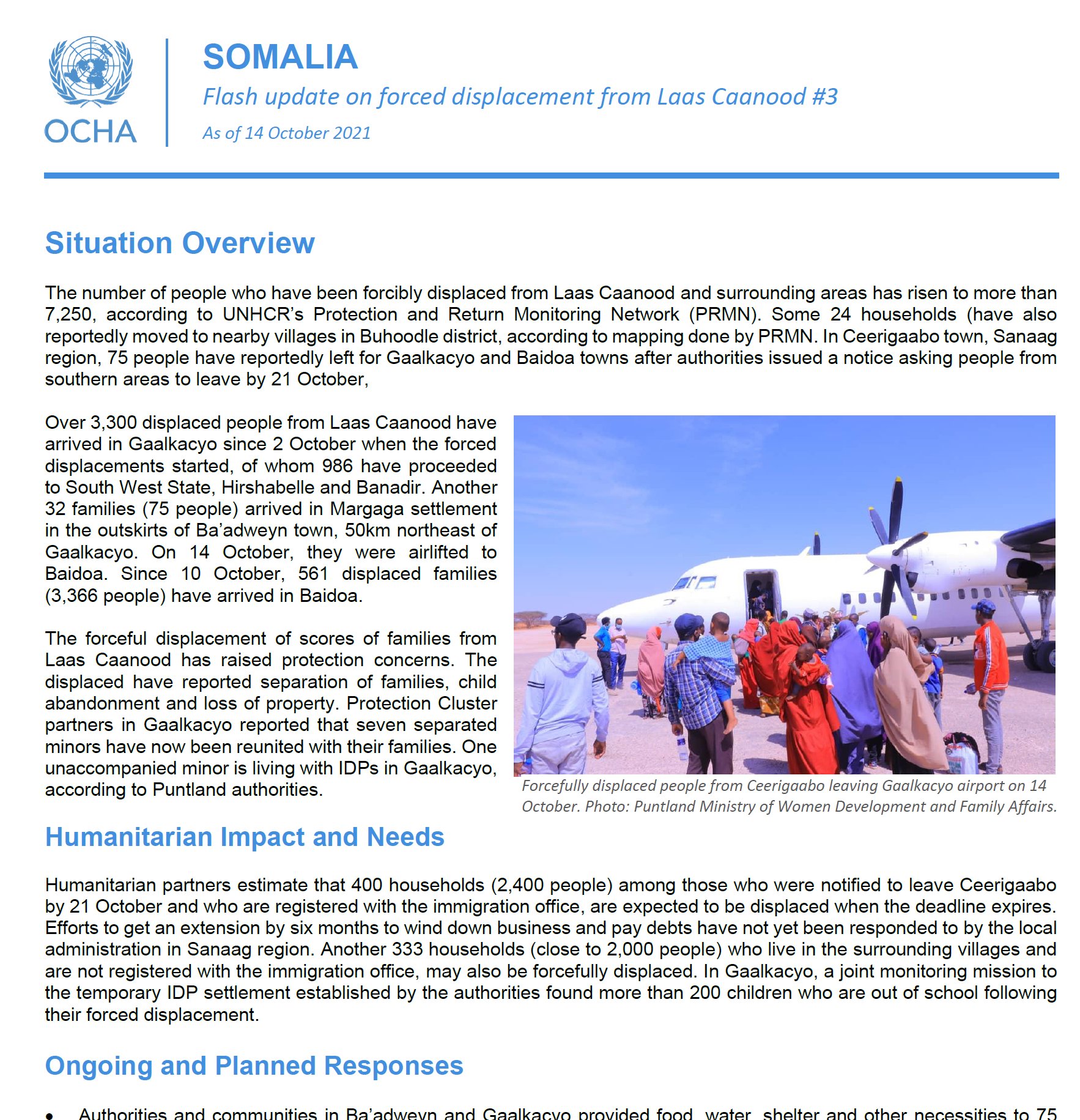 Intimating that Somaliland was not in control in other areas outside of Las Anod, another report stated that families moved out to nearby villages and in the Buuhoodle area, putting the total number of people ‘forcibly evicted’ at 7,500.

“The number of people who have been forcibly displaced from Laas Caanood and surrounding areas has risen to more than 7,250, according to UNHCR’s Protection and Return Monitoring Network (PRMN). Some 24 households (have also reportedly moved to nearby villages and in the Buhoodle district, according to mapping done by PRMN. In Ceerigaabo town, Sanaag region, 75 people have reportedly left for Gaalkacyo and Baidoa towns after authorities issued a notice asking people from southern areas to leave by 21 October,” a 15 October OCHA report stated.

In fact, people extradited from the Las Anod areas were not refugees in the true sense of the word. They were originally displaced by the multi-faced, seemingly never-ending conflicts and armed engagements in Somalia two to three decades ago. Since then, they found a rhythm in trade setting up businesses all over main Somaliland towns outside of the capital, Hargeisa.

But as time on, authorities suspected, criminal elements who belonged to either the ISIS chapter in Somalia – Daesh – or Al-Shabaab found refuge and bases from where they launched targeted killings not only in the host town – Las Anod, but also most probably in neighboring towns across the border.

Galkayu of Puntland, as if to bear testimony to the suspected terrorist elements among the evicted, detained 7 or 8 of the people ousted from Las Anod suspecting they belonged to terror groups.

President Bihi underlined that the UN office’s response to the situation revealed an ill-concealed partiality of the United Nations and a lack of empathy with the bereaved families of Las Anod who had lost so many close ones, leaving the rest live under a pall of constant fear.

Earlier during the week, the Somaliland media asked the Minister of Interior why the people were not given notice of eviction, and he said it was because authorities were afraid that assassins lurking behind close-knit expatriate communities might have taken advantage of the time given to leave some devastating, parting shots – more targeted killings.

Baltic nations to send missiles to Ukraine with U.S. support

Ukrainian general claims to know when Russia will ‘invade’

Russia’s menacing forces near Ukraine spark fears of an invasion. How close is Europe to its first war in decades?