MOGADISHU – A media house in Somalia has submitted a lawsuit against the nation’s spy chief and a top presidential aide last week and has received strong support from journalist unions.

Mustaqbal Media filed the lawsuit through Heegan Law, a Mogadishu-based firm and listed Fahad Yasin, the Director of the National Intelligence and Security Agency (NISA) and Abdinur Mohamed Ahmed, Villa Somalia’s Deputy Chief of Staff, as the defendants in the case. It was filed with the Attorney General’s Office on May 3 to coincide with World Press Freedom Day.

In a two-page legal brief, the suit alleges that Yasin and Ahmed played a crucial role in directing the unlawful attack on Mustaqbal’s offices on the morning of April 27. The raid came on the heels of intense street battles between rival factions within Somalia’s military.

Bashir Mohamud, an editor, told media watchdogs that the Turkish-trained Haramad police unit led the raid. He said the officers assaulted journalists and ransacked their compound before confiscating computers, cameras and cellphones.

Ahmed Isse Gutale, the company director, said that the newly appointed Banadir Police Commander, Farhan Mohamud Adan, had personally apologized for the raid but that the police have still not returned the seized equipment.

The Somali Journalists Syndicate (SJS) and Somali Media Association (SOMA) released a joint statement on Saturday calling for an end to impunity for crimes against media practitioners.

“We, SJS and SOMA, support our colleagues at Radio Mustaqbal and its journalists in their quest for justice. We believe that the only way to stop impunity for the attacks and abuses against journalists and media houses is to prosecute the perpetrators— even if they are powerful government officials.”

Abdalla Ahmed Mumin, the Secretary-General of SJS, added that he hopes the Attorney General assures that the culprits be brought to book.

“Attacks on media and journalists have become the norm. Unfortunately, officials who commit crimes against journalists and media stations roam freely. The April 27 raid on Radio Mustaqbal in Mogadishu remains a serious violation of media freedom in Somalia. Nobody should be above the law, and the perpetrators of this crime should not be forgiven. We expect the Attorney General to expedite and take appropriate measures so that those found guilty of this heinous crime can face the court of law.”

Mohamed Osman Makara, the Chairperson of SOMA, said that they stand with Mustaqbal in the name of solidarity.

“The attack on our member radio Mustaqbal Media was not just an attack on a single radio station. It was an attack on the freedom of the media throughout Somalia. We support the case filed by Radio Mustaqbal, and we hope the case will be referred to the relevant court and that it will be heard fairly.”

Dozens of journalists have reported being assaulted and threatened by government forces. There were documented incidents of soldiers confiscating equipment and demanding that footage be recorded at gunpoint. 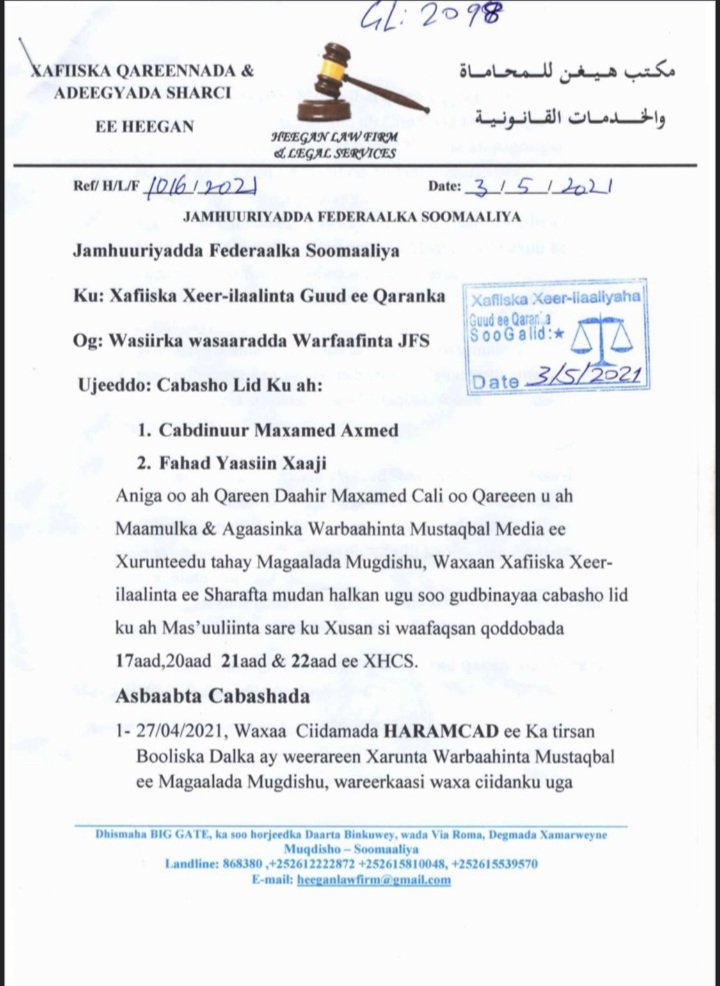 Wole Soyinka Is Not Going Anywhere

Myanmar will not address world leaders at the UN, Afghanistan will