The forum said that their existence is necessary to thwart the unilateral actions of President Farmajo.
“The need for this forum has become paramount because the constitutional tenure of the President and the two Houses of parliament has expired coupled by the dangerous and well-documented efforts to undermine political agreements by the President whose term expired.”

The group laid the blame for failed elections squarely at Farmajo’s feet.

“He has failed to lead the consensus-based electoral process that is legitimate, fair and inclusive. Such a process is the ultimate responsibility of any President and is the cornerstone of security, stability and future progress of the country”.

The open letter describes Farmajo’s actions as political theatrics played out for outside viewers and denounces his actions at home as “repressive.”

“His unilateral call for a fifth meeting since his term expired is again aimed at the external audience while internally his repressive actions continue to elevate the crisis and the unprecedented mistrust between all stakeholders. His preemptive call for a meeting, while sending international partners on a different errand, is among his classic maneuvers and illustrative of his intent to scuttle the progress in attaining a consultative and inclusive solution to his expired mandate.”

The NSF also raised concerns that President Farmajo was using the security apparatus for political gain and called for a change to the security command before election talks can be held safely.

“The security command can no longer under [sic] his Commander in Chief as he ostensibly uses for personal gains; henceforth, the NSF calls for an immediate transition of security command from him prior to holding the summit. As of the recent actions of deploying troops to Gedo and seizing the airport security are clear evidence that Mohamed Farmajo is irresponsibly taking advantage of his incumbency in spite he lacks the legitimacy to do so.”

The NSF ended its letter with an appeal to the international community to “immediately intervene the political crisis in Somalia before it is too late.

The NSF is a political alliance made up of the Council of Presidential Candidates (CPC) and Jubaland and Puntland’s presidents. Senate Speaker Abdi Hashi chairs the forum.

You can read the full letter below; 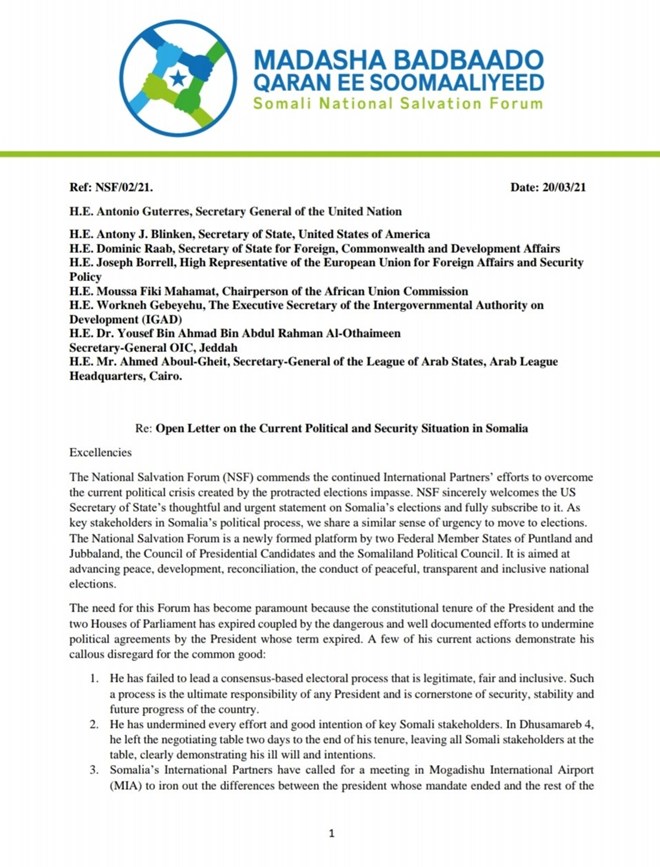 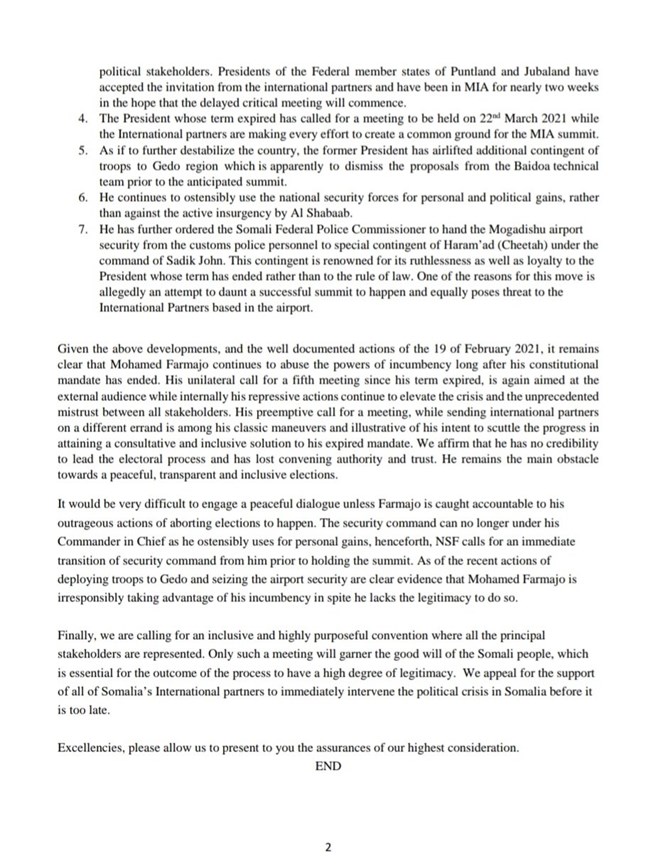 Minneapolis cop gets nearly 5 years in killing of 911 caller

Man Charged Under British Terrorism Law in Death of Lawmaker