MOGADISHU – Somalia’s parliament has demanded an explanation from President Mohamed Farmaajo on the whereabouts and state of hundreds of Somali youth who were reportedly undergoing military training in Eritrea.

A statement from the Foreign Relations Committee from January 18 demands an explanation from Farmaajo on the whereabouts of the military trainees.

The council also calls on the President to dispatch a team to the Eritrean capital, Asmara, to confirm whether the Somali nationals are ‘alive or dead’.
Lawmaker Abdulkadir Osoble is currently chairing the Somali parliament’s committee on foreign affairs and is the one who issued the letter to the country’s leaders.

The demand by parliament follows reports this past week that the Somali nationals undergoing training in Eritrea were fighting in the Tigray war in Ethiopia.

Eritrea has sent troops to fight alongside the Ethiopian military against the rebel Tigray forces.

Families whose children were taken to Eritrea in 2018 have variously appealed to the government to bring their sons back. The Federal Government denied this week the trainees were deployed in Eritrea.

Former national intelligence deputy chief Abdisalam Guled said in a TV interview Tuesday he had obtained intelligence from the Ethiopian military that the Somali trainees were fighting in Tigray. 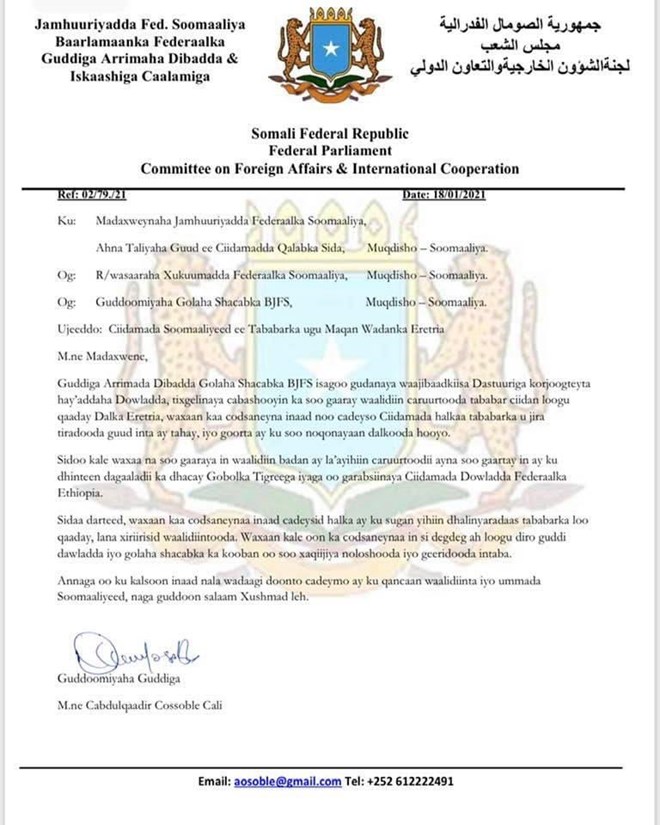 *Note a previous version of this article stated that the above letter was dated December 18. That was an error and has since been corrected.

US congressional delegation arrives in Taiwan on heels of Pelosi visit

German reservist on trial accused of spying for Russia

What charges could Trump face for holding on to Top Secret documents?